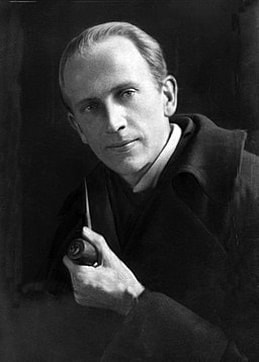 Public domain photo by Emil Otto Hoppé, via Wikimedia Commons
​​​Best known as the creator of Winnie-the-Pooh and the writer of poems for children, A.A. Milne also wrote a detective fiction and plays. The picture of him holding a pipe suggests he could play the role of Sherlock Holmes. Here are five facts about Alan Alexander Milne.
​
1. He wrote a detective novel often included in lists of the best crime books of the 20th century. The Red House Mystery, published in 1922, is still in print and available as a free ebook through Project Gutenberg. The novel is a classic whodunit featuring an English country house setting, an amateur sleuth with a sidekick, a locked-room puzzle, and enough clues for the reader to solve the case.

​2. Milne wrote dozens of plays and screenplays. His drama, The Fourth Wall, was staged in the U.S. as The Perfect Alibi. It was an early, possibly the first, play to use the inverted form of detective fiction, with the murder shown to the audience in the first act. The audience knows who the killer is and follows the investigation. The suspense lies in whether the killer will get away with the crime. The play's popularity resulted in its adaptation as a movie, Birds of Prey (1930), for which Milne shares the screenplay credit.

​
​3. He was the first author to sell merchandising rights to a character. In 1930 Milne sold Winnie-the-Pooh rights to an agent who earned $50 million within a year for a doll, radio program, board game, and other paraphernalia. The mystery, at least to copywriters, is whether to hyphenate Winnie-the-Pooh. Milne did. The Disney Company, which acquired Pooh rights in the 1960s, dropped the hyphens.

4. Milne played cricket with the creator of Sherlock Holmes. Besides A.A. Milne and Arthur Conan Doyle, the amateur athletic team included J.M. Barrie and P.G. Wodehouse. The team formed as an offshoot of the Authors’ Club, founded in 1891. The authors played matches against teams of publishers, actors, and artists.

5. Milne had a secret job in British Military Intelligence. After being wounded in World War I, he worked as a propagandist. Though records of his MI7b unit were ordered destroyed, some mysteriously survived. Saved from a dump in 2013, the papers include his satirical poems, one about a Captain William Shakespeare, who is assigned to a propaganda unit.