"Cooking’s not rocket science. If an old codger like me can do it, anyone can."--Granddad in By Cook or by Crook
The books in my Five-Ingredient Mystery series have an appendix with recipes for some of the dishes mentioned in the story. This page contains a sample of main and side dish recipes.
​​​
Visit my page on the HobbyReads blog for additional recipes.
​
Read my reviews of cookbooks focused on recipes with few ingredients.

Heat the oil (or oil and butter) at medium high in a skillet large enough to hold the chicken in a single layer.
Sauté the chicken pieces for 3-4 minutes until lightly brown. Turn the pieces over and sauté them on the other side for 3-4 minutes, until the internal temperature is 165 degrees Fahrenheit.  Remove the chicken and loosely cover it with foil.

Add the shallots or onions to the pan and sauté them until lightly browned. Stir the vinegar into the skillet little by little and boil the liquid down until it’s no longer watery. Stir in the crème fraîche or cream. Cook until the mixture is blended and has turned light brown, about 5 minutes.

Return the chicken to the pan and heat the pieces in the sauce, rotating them to make sure all sides are in the sauce. Serve with vegetables as a main course.

Combine the marmalade, the vinegar, and the thyme in a microwavable cup. Microwave the mixture for 1 minute at half power. Stir to mix the ingredients. Microwave for 30 seconds at half-power. Repeat the 30- second microwaving until the mixture is soft enough to brush on the hens. Set the mixture aside and keep it warm.

Discard any giblets from the hens.
Rinse the hens under cold water and pat them dry. Remove the skin and split the hens in half lengthwise.
Coat a rack with vegetable cooking spray and put it in a shallow roasting pan.
Place the hens on the rack, with the meaty side up.
Brush the hens with half the glaze mixture.

Bake at 375 degrees for 30 minutes.
Brush the hens with the remaining marmalade mix, and bake an additional 20-25 minutes.

Serve with an optional garnish of orange slices.

Alert readers noted that the recipe for strata in By Cook or by Crook left out the instruction about when to pour the egg mixture over the other ingredients. That instruction appears in bold in the recipe below.
Preheat the oven to 350 degrees.

Brown and drain small chunks of the sausage.
Beat the eggs with the milk (and salt if you use it).
Cube the stale bread and spread it in a single layer at the bottom of a 9X13 inch pan. Sprinkle the sausage and the cheese on the cubed bread. Pour the egg mixture over the other ingredients.
Refrigerate overnight or a minimum of an hour.

As the designated holiday dinner makers in our family for the last 25 years, we've experimented with different types of stuffing, starting from scratch or using various stuffing mixes. We've settled on a 5-ingredient one as the favorite, a modified version of the recipe on the Pepperidge Farm® Herb Seasoned Classic Stuffing package.  Note: the cubed and the cornbread stuffing mixes from Pepperidge Farm aren't the same. Look for the blue package, not the red or gold one.

Melt half the butter in a large skillet over medium heat. Sauté the onions for five minutes or until tender. Add the celery and cook for another 3 minutes. Melt the remaining butter in the skillet with the vegetables. Stir in the stuffing mix. Add hot water or broth slowly, mixing it with the stuffing until moist, using less liquid if you prefer stuffing on the dry side.

Stove-top stuffing: Cover the skillet, remove it from the heat, and let it stand five minutes. Fluff the stuffing with a fork and serve.
Casserole stuffing: Heat the oven to 350 degrees. Spoon the stuffing into a 2-quart casserole. Bake 30 minutes or until hot.
For in-bird stuffing: Loosely spoon the mixture into the turkey or chicken cavity before putting the bird in the oven. Don't overfill the cavity. A stuffed bird takes longer to cook than an unstuffed one. Put any remaining stuffing in a casserole dish and bake it for 30 minutes at 350 degrees. 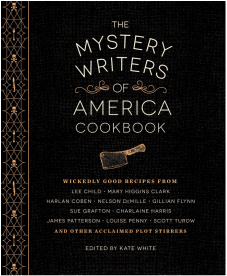 ISBN: 978-1594747571
I'm thrilled that one of my recipes is in the Mystery Writers of America Cookbook. The book, edited by mystery author and former Cosmopolitan editor, Kate White, contains wickedly good recipes. The ones I've tried have been delicious.

The recipe I contributed, Take Your Pick Vegetable Salad, feeds a crowd. Though it has more than five ingredients, it's a time saver because you assemble it the day before you serve it. With one less dish to prepare at the last minute for your party or holiday dinner, you have more time to spend with family and friends.