​Maya (Mary Ann) Corrigan combines her passion for food and detective stories in her Five-Ingredient Mysteries: By Cook or by Crook, Scam Chowder, Final Fondue, The Tell-Tale Tarte, S’more Murders, Crypt Suzette, Gingerdead Man, and Bake Offed. The series features a café manager and her live-wire grandfather, the Codger Cook, who solve murders in a historic town near the Chesapeake Bay. Each book has five suspects, five clues, and Granddad’s five-ingredient recipes. Ms. Corrigan lives in a Virginia suburb of Washington, D.C. She hads been featured in First for Women and Woman’s World. Before writing crime fiction, she taught American literature, writing, and detective fiction at Northern Virginia Community College and Georgetown University.

Interviews on Podcasts and Videos 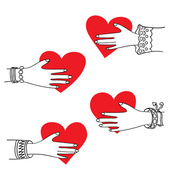 Occasionally we read about brave people who jump onto train tracks to save someone or pull crash victims from fiery autos. Most of us will not have the chance to save a life in such a dramatic way, but we can all save a life without any cost to ourselves, as the story below illustrates.

At two months of age, my grandson was diagnosed with a rare liver disease, biliary atresia, which afflicts one baby in 14,000. Only a liver transplant would save him from an early death. Fortunately, his father was a matching donor. Fifteen hours after the transplant team began excising part of my son’s liver, they finished installing “spare” parts in my five-month-old grandson, replacing his diseased liver. 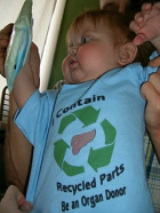 But even a good chunk of my son's liver was not enough. The baby also needed blood vessels from an unknown donor. That donor checked a box on his driver's license and gave away what he could no longer use. Not every child who needs a liver transplant finds a match among willing live donors. Many die while awaiting a rare pediatric donor or an adult donor whose liver can be split between a child and an adult recipient. A single organ can save two lives, but only if a generous person signs up as a donor.

My grandson is now thirteen. The photo here shows him a few months after his transplant. His T-shirt announces that he contains recycled parts and tells you how to save a life: Be an organ donor. If you haven’t already checked the box on your driver’s license, do it the next time you renew your license or, even better, do it now.
In 2018 more than 13,500 Americans were on the liver transplant list, 8,250 received livers, and 1,170 of them died while awaiting a liver. Those statistics come from UNOS, the nonprofit group that manages the nation's organ transplant system. There are always more people in need of organs than there are donors.